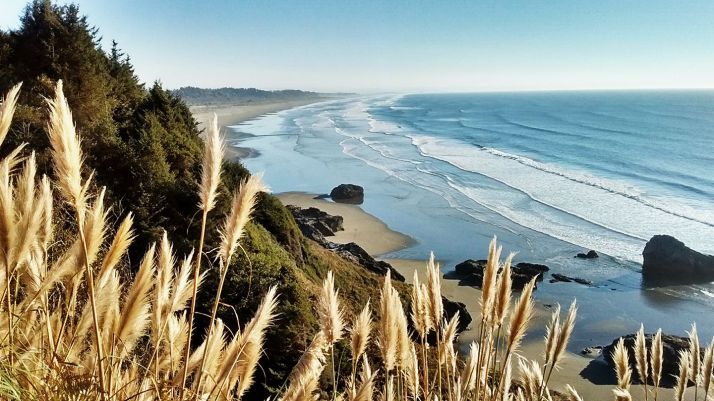 Three days before my 56th Birthday, I made the dumbest mistake. It almost cost my life. My Birthday celebration could’ve just as easily become my Funeral.

It happened Friday evening near sunset. I was sitting on the cliff near Camel Rock, overlooking the Pacific Ocean, while waiting for my friend Charlene to show up. But for some reason, Charlene never arrived and I got bored.

I peered over the precipice. I’d heard that a car had recently been shoved off the cliff and I was curious to see it. Soon I found myself wandering down the path leading to the bottom of the cliff.

It must have been my preoccupation with finding the smashed car that made me careless. Either that, or I was drunk on the Elixir of Life…the gorgeous day. The tantalizing spray of surf. The rays of the setting sun. It was intoxicating, and I soon found myself laughing as I ran along the bottom of the cliff…Laughing at the surging waves.

“You can’t catch me!” I shouted. “I’m not afraid of you!” Those were the last words I remember saying.

A moment later, a big wave rounded a bend and crashed into me head-on. It lifted me off my feet and slammed me between the huge boulders. My arm and leg hit hard, but fortunately my head didn’t slam into the rocks–otherwise, I would’ve drowned immediately.

I screamed as salt water splashed into my mouth. “JESUS! Help Me!”

I cried. I gasped for air. I prayed to God with desperation. “JESUS….HELP ME!” It was a tortured scream, and it must’ve gotten the Lord’s attention.

Immediately, I felt myself drop onto the rocks along the shore, as the waves receded around me. “Thank you, God! Oh–thank you!” I couldn’t believe I’d survived. I crawled as far away from the surf as I could, watching the menacing waves claw at the nearby rocks.

My leg and arm hurt so horribly, at first I thought they were broken. Blood oozed from my wounds. I was all bashed up and bloody, but I was ALIVE!
My cellphone was ruined, though, and so was my camera. Everything was drenched and full of salt water.

It was then that I noticed a little blue car sitting just a few feet away from me. The irony of it all! My quest had been successful. I’d found the smashed car–but it had nearly cost me my life!

With a sinking feeling, I realized that both the car and I were entombed in a box-like canyon. Steep walls rose up on all sides, and I knew that my only exit was through the raging, foaming surf to the West.

The sun was setting and it was starting to get cool. Hypothermia would soon set in. My situation was growing worse by the minute.
I wouldn’t last long if I didn’t get to moving.

Quickly, I stripped off most of my clothes and wrung them out–hanging them in the sunshine to dry. It wasn’t easy working around the shattered car. There were shards of glass and sharp metal everywhere–but I felt a sense of affinity with the pitiful little car. We were both bashed, broken, and stranded at the bottom of a cliff.

I talked to the car as I worked. I mumbled and grumbled–talking to myself, to the Lord, to the little smashed car. What a mess! Where was Charlene? Surely she would notice my car parked up at the top? Or would she…?

I watched the surf carefully, counting every 7th wave. There was a definite break in the onslaught of waves every so often. I would have to make a run for it at some point. But would I make it? I HAD to! There was no other choice.

At last, I made a decision. It was now or never. It was do or die. The sun was dipping toward the horizon. I was out of time.

I gathered up my drenched belongings, and put on my clothes. I said goodbye to the smashed little blue car, then ventured toward the foaming surf and waited with fear gripping my throat.

Finally, there came the break in the waves. The surf receded, and I made a dash for the rocky stretch leading along the shore. Well….It wasn’t a “dash” really. I was hobbling fast, limping as quickly as my hurting leg allowed. I looked over my shoulder toward the surf. It had stayed away! I was going to make it! Thank you, Jesus!

The trek to the top of the cliff was painful and rather embarrassing…but not nearly as discomfitting as the look on Charlene’s face when she saw me. She was waiting there at the top near my parked car. When I showed her my banged up limbs and told her my story, she was a mixture of relief and exasperation. But she wasn’t nearly as exasperated as myself.

I’d ruined my cell phone and camera. I was banged and bloodied and it felt like I’d never be normal again. I’d nearly killed myself–or at least maimed myself for life…. Yet somehow, I’d come out Alive, and for that I was so thankful!

I stood staring down at the surf far below. My life had nearly ended that day. 56 years of on this earth had nearly come to an end. Why had God spared me?

I’d learned a great lesson that day. Never take life for granted…. Never assume that tomorrow would come. And for goodness sake….Never tell the big raging waves. “You can’t catch me! I’m not afraid of YOU…!”

Never, my friends!….Never, but NEVER say that!