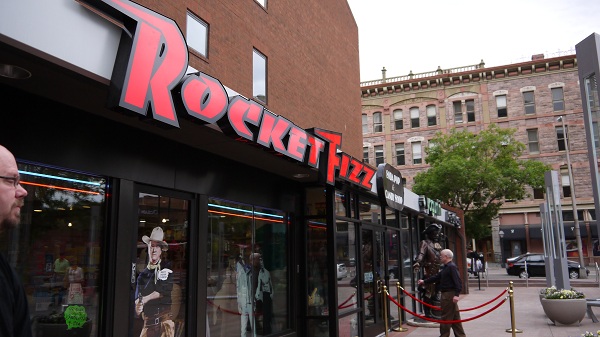 It was late afternoon.  Almost evening.  And here I was, a pen-less writer wandering the streets of Denver, searching for a stray ink-pen. I was getting desperate.

My two daughters weren’t at all helpful. “Mom!” my teenager said. “You don’t ask a stranger for a pen!  Just go and buy one!”

But there were no stores nearby that sold ink-pens…Just clothiers, boutiques and Fine Food Establishments.  Places with strange names like “The Lima Bean”…and “Coyote Ugly”… “The Cheeky Monk”…and “Rocket Fizz.”

It was turning out to be surreal vacation.  I wanted to write about it…about the strange cityfolk wandering the streets of Denver.   I wanted to indulge in the joys of People-Watching…But I had no pen to record these things.  In vain, I searched the gutters for an ink-pen.  Alleys.  Trash bins.

…But I couldn’t stop. When words are swirling in your head, begging to be written, you have to do something!

I walked into the “Rocket Fizz” Candy Shop with my daughters trailing me warily, and explained my predicament to the blue-haired cashier.  Unlike my offspring, she understood perfectly.

“No writer can be without a pen,” she said, crunching on a blueberry lollipop.  Her tongue was as blue as her hair.  She was just a kid, but she understood things far beyond her years.  She handed me an ink-pen and several sheets of paper.

“Have fun!” said the blue-haired nymph. “And welcome to Denver…!”    A sweet kid!..Sweet as the tubs of candy surrounding her.

“Never judge a person by the color of her hair,” my daughter murmured as we left the shop.

“Absolutely not!” I said.  I was already scribbling happily.

It was potpourri of strange scents…A hodgepodge of sights and sounds, all percolating in the city streets. Bikes and Limo’s.  Briefcases and backpacks.  Balding women and long-haired men.  Tattooed grannies, and skate-boarding grandpas.  Business men in $5,000 suits…and homeless people in rags.

The filthy rich and the filthy poor.

I wrote and wrote…scribbling my way down the sidewalk, bumping into parking meters, lamp-posts and people—excusing myself to one and all—then scribbling on.  I didn’t realize my peril.  It didn’t occur to me that a country bumpkin in the Big City could come to ruin.

I was oblivious to danger.

I could hear my kids laughing behind me.  My giggling girls.  They had shed their embarrassment momentarily, and were laughing with abandon….as only my daughters can do.

I smiled to myself.  Love and laughter and scribbled memories…written on scraps of paper with a borrowed pen.  Such a glorious time we were having. If only we could walk on like this forever, walking into the sunset.

The skyscrapers and Capitol building gleamed in the rays of the setting sun.   Wisps of steam drifted from beneath the man-hole covers. All about us was the sound of strumming guitars…Mariachi music drifting out of eateries.

It was Fairytale-ish.  Alice in Wonderland. The manholes…mysterious rabbit-holes leading to God-knows-where.   Quirky characters stepped from storybook-buildings and meandered through the pages of my scribbles.  Blue-haired nymphs.  Street muscicians.

Happy voices and sad ones, too.  Aimless snatches of conversation.  People talking to themselves…to one another…to their cell phones.   “I love you and I miss you…” a man said to his celly.  “I mean it!  I can’t take this stuff any more.  We have to do something, you hear!”

I followed the mesmerizing murmur of voices…The Pied Piper of People-Watchers was leading me onward….Leading me toward the setting sun…leading me toward certain danger as Pied-Pipers always do.  I followed willingly.  Blindly.  With pen in hand, I recorded every word.

Scribbled words…They were far better than souvenirs from the finest gift shop.  I smiled to myself and stepped into the street.

My whimsical thoughts came to an abrupt end.  I heard the screech of brakes before I saw the oncoming bus. I stepped back.

The bus flashed by, just inches away.  I stared after it pensively. The Pied Piper of People-Watching had nearly taken my life. The wretch!

Gripping my pen, I went on scribbling. 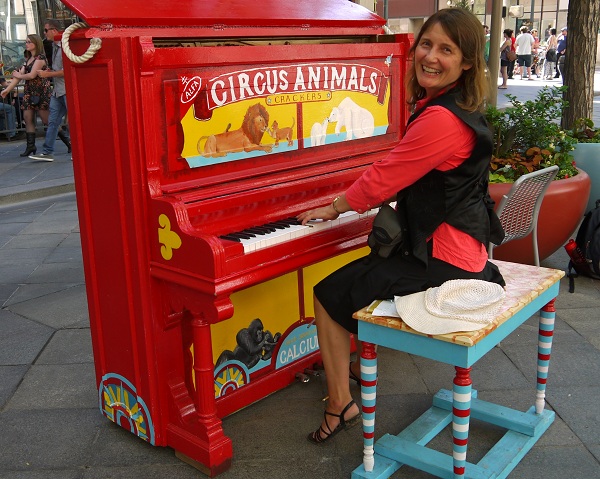 4 thoughts on “Love and Laughter… Scribbles and Skyscrapers”