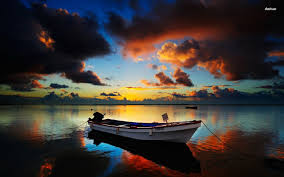 I feel most deprived.  Since coming to the West Coast, I haven’t gotten to go boating.

All summer long, I used to race up and down the Mighty Muddy MO, but now that I live near the lovely blue waters of NorCal, I’ve had to give up my favorite past-time.

The greatest irony is that there are two big boats parked in our front yard.  A seafaring V-Hull…as well as an expensive race-boat called the “PickleFork-Hydro” that goes from 0 to 120 mph in moments… When it’s running, that is!

My husband has spent many days trying to coax life into these silly boats.   But they are hypochondriacs—both of them.  Sickly vessels, not worthy of their calling.

I loathe them.  They take up oodles of time and money.  They have yet to take me on a single voyage…Not one trip in three years!  I resent them greatly.

After years of boatlessness, I’d nearly given up on my dream of ever boating again…Then one day, it happened.
Michael and I stumbled upon a boat at a Yard Sale…a nondescript 12-footer.  A sturdy little job made of fiberglass.  It had camouflage paint and was as ugly as last week’s leftovers, but I immediately fell in love with the row-boat.

Michael offered the owner a hundred bucks…Not a nickel more.  And the man took it.

We carried our skiff home and promptly named it “The SS Minnow,” after the noble boat on Gilligan’s Island.  I was ecstatic.
At last, I had the real deal!  Not a fat, useless V-Hull, or a hypochondriac Pickle-Fork…But an honest-to-goodness boat with oars!

“Make us a picnic lunch!” said the Captain…the Skipper of my ship.  “We’re heading for the River!”

I’ve never packed a lunch so fast in my life.

Throwing our sandwiches into the pickup, we bounced our way down to the river bar, pulling along the homely little Minnow.  There were several other boats ahead of us.  Sleek, shiny boats with fine paint-jobs—almost as fancy as our hypochondriac-boats sitting at home.  They made the “SS Minnow” look like fish bait.

But I couldn’t care less.

Let ‘em have their prissy Playboy-Boats!…Useless relics that spend most of their days lounging in a marina!…Preening themselves in the sunshine!

Brave and jaunty, our little dingy set out amongst the finer vessels—but soon, the fancy boys disappeared, roaring up the river.  We were alone with our worthy Minnow.

Michael manned the oars.  As First Mate, I rode the helm, humming a rendition of “Michael Rowed His Boat Ashore!  Hal-le-luu-uu-yah!”

Such a fine afternoon.  A day of my dreams.  How long had I waited for this moment?

The river bluffs rose up before us: pale palace walls of the castle-cliffs gleaming in the sunshine.   I gazed at the blue dome overhead…Marble blue, as far as the eye could see.

Leaning back, I tangled my fingers in the crystal waters rippling past.  Hawks circled above us, their cries rebounding from the bluffs and ancient trees lining the river.

We had slipped back in time—paddling along like our ancestors before us, the oars dipping in-and-out, in-and-out.   At last, we came to a sandy bar on the distant shore.  Trees and trickling springs.  Shadows and solitude.

Like explorers to the New World, we beached our boat and climbed ashore.   We picnicked and frolicked—exploring the little river cove, reveling in spring-like breezes.

We whiled the day away, the Capt’n, the Minnow, and I—paddling up and down the river—forging the whirlpools and currents.  Michael rowed mightily and the steady Minnow forged ahead, never once threatening to dump us in the waves.

Eventually, of course, it had to end.  The sun began to set and the Playboy-Boats returned, snorting their way down the river.  They gulped gasoline and burped fumes, spreading an oily sheen across the waters.  They sat preening themselves in the rays of the setting sun, looking down on us from their haughty hulls.

But I was unperturbed.

I had memories to take home that they knew nothing of.  Gentle memories of whispering waves and soaring hawks.  The breathless silence of shadowy glens.   The castle-bluffs gleaming in the sun.
Sunshine and rippling waves.  The flash and splash of wandering fish…And the joy of our vessel swimming among them.

I had my boat…the little Minnow.  A small ship on her maiden voyage…not at all ugly to me now.  A tiny Queen amongst the noisy sports-boats.  She was everything I’d dreamed of and more.

We were the lucky ones.  And I knew it.   There was none on the river that could compare…None finer.  None braver.  None more adventurous…