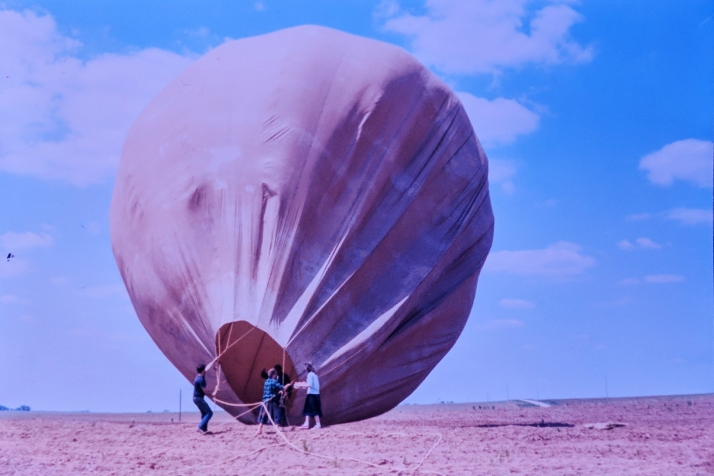 It was a day we won’t soon forget. A day that lives in infamy—the Day of the Balloon.

My father called the crew together in the early morning hours, directing us to a newly-planted cornfield at the far corner of the farm. Nearly everyone was there—the kids, grandkids, in-laws and siblings. Even Grandpa came along, to keep watch over his cornfield if nothing else.

Dad hauled out his tattered treasure…a huge gray-green bag that looked more like a bloated sow than a hot air balloon. It didn’t have a riding basket, but that was a small matter to Father.

He made us help him as he dragged the huge balloon to a wood-stove that sat at the edge of the cornfield. We watched him build a blazing fire with cobs and kerosene. None of us questioned the method to this madness. The fact that our father had survived 58 years of this sort of thing seemed proof enough that he knew what he was doing.

Following Dad’s instructions, the crew draped the mouth of the balloon over a tee-pee of ladders standing above the wood-stove. We stepped back and waited, our hands grasping the ropes tightly.

Nothing happened at first, then life surged through the balloon as it took a breath of hot air. The crew burst into cheers, laughing and clapping.

Our joy was short-lived.

Like a genie rising from a bottle, the balloon swelled to monstrous proportions in a matter of seconds. We gaped at it, amazed to see the pitiful balloon become a monster before our eyes. It tugged hard at the ropes, demanding freedom. 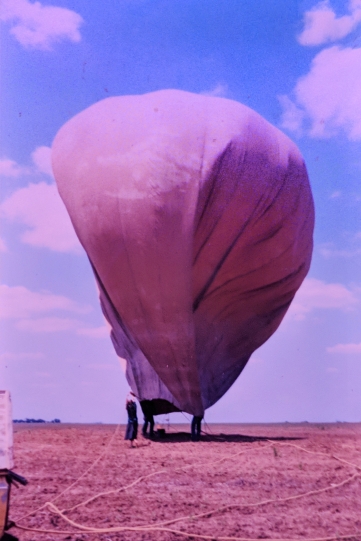 We hung on, gritting our teeth and digging our heels into the soft earth. But it was no use. The balloon only pulled harder.

“Hold on,” Dad shouted. “HOLD ON!” His words ended in a clatter.

The hot air balloon wrenched free, taking the ladders along with it. No one but Dad had the courage to hold on to the errant monster. With ladders banging against him, Dad was pulled across the cornfield, his leaping gait growing longer and longer as the balloon picked up speed.

Both my father and the balloon were headed straight for the road and the power lines.

Closer and closer they came till the balloon was within a few yards of the lines, then at the last moment, Providence intervened. The winds shifted and the balloon veered southward. Across the field it went, pulling the hapless owner in its wake.

My father was shouting, but what he was saying was anyone’s guess.

Everyone came to their senses at once and hurried to help. We managed to catch up with Dad and the balloon in the middle of the newly-planted cornfield. Scrambling for the ropes, we galloped about madly, colliding with Dad and with one another–doing more harm than good.

Out on the road, trucks slowed to a crawl. Farmers shook their heads as they passed by–lamenting the destruction of a perfectly good cornfield. But we were oblivious to it all.

“Hold it down!” Dad was shouting. “Get inside the balloon if you have to. Just hold it down!”

Fearfully, we did as we were told—crawling through the mouth of the monster and into its bowels. The balloon responded in wrath, mauling us mercilessly—tossing us from side to side like scraps of laundry in a dryer. My sister and the others collided with me in the intense heat, panting and gasping for air.

Indeed. In the course of time, our bladders emptied and so did our pockets. Wet and bruised, we somersaulted about in a hail of coins and combs and trinkets, tumbling end over end.

At last, Dad yelled from the mouth of the balloon. “I’ve got the thing tied to the truck now. You can come out!”

Wearily, we scrambled our way to the entrance and stumbled outside. Relieved of our weight, the balloon immediately began to roll across the field once more, straining at the ropes. Reaching the full length of its tether, the balloon turned on us with a vengeance. Swinging around, it careened toward us, threatening to bury us alive.

We all scrambled out of the way—everyone but Grandpa.

With the balloon in hot pursuit, our grandfather hobbled off as fast as he could, muttering to himself as he stumbled along the corn rows . “Heck,” Grandpa was saying. “Oh heck.” The balloon chased him halfway across the field, breathing hot air down his neck, threatening to overwhelm him at any moment.

The crew watched helplessly till Father began to shout once more.

“We’ve got to do something!” he hollered. “…Got to get this thing off the ground. The balloon is smashing the new corn.”

Indeed. We hadn’t noticed the mess we were making.

Dad was sure he could remedy the matter. “Somebody go and get me a bucket of coals from the wood-stove!” he said.

Someone ran and got it.

Dangling the bucket of coals from a long wire, Dad held it to the mouth of the balloon. Smoke billowed. Sparks flew. Flames shot skyward. Father was oblivious to the danger. His eyes gleamed as he followed the restless wanderings of his balloon.

Pushing the bucket deeper into the opening, Dad sent the balloon surging up and up. “More corncobs!” he shouted. “Get more corncobs!”

Mindlessly, we ran to do his bidding, adding cobs and kerosene till the flames leaped four feet in the air–dangerously near the fabric. The balloon soared higher, tugging at the ropes that bound it to the truck.

What happened next I’m not certain—it all happened so fast. We heard a tremendous pop as a rope broke, and the the balloon lunged forward, straining at the one remaining tether. The truck began to slough sideways, churning up the cornrows as it went—narrowly missing Grandpa.

We heard a yell and looked up to see someone soaring overhead. It was the son-in-law. The one who loves flying. Although usually content to be airborne, he didn’t seem happy about it today. The balloon had snarled his feet in ropes and was now toying with him–tumbling him through space–turning him one side up then the other, like a puppet on a string.

The balloon at last grew weary of its puppetry, and somersaulted the young man to the ground before resuming its restless wanderings. The son-in-law lay on the ground, holding his battered head. “That’s it!” he was mumbling into the dirt. “No more flying for me!”

Out on the road, a burly farmer got out of his truck and came toward us. “I’ll be dog-goned,” said the farmer. “What in the world you doing…? Getting ready to go to the moon?”

Dad grinned. “We’ve got a tiger by the tail and we can’t tame him!” 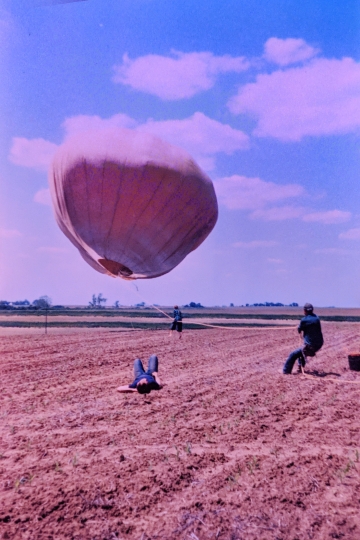 The farmer shoved back his hat. “You get a good strong wind and it’ll carry this thing away—truck and all!” That sobered Dad up some. He quit grinning and started thinking.

“Tell you what…” said the farmer. “I’ll help you wrestle it down if you want.”

Dad thought about it another minute and decided to take the farmer up on his offer. He called the rest of the crew together and we all lit into the monster with a vengeance. But the balloon had plenty of fight left in it, foiling us at every turn—rising up and up whenever we thought we had it licked.

It was like trying to cram a genie back into a bottle.

I don’t know how long we fought the thing, but at last it collapsed. The gray-green monster lay throbbing and writhing amid the cornrows. The crew slumped to the ground, too, panting.

“Well,” Dad said, wiping his brow. “I don’t know about you, but I’ve had about all the fun I can stand for one day!”

The crew lay back motionless, gazing at the sky. Silence enveloped the cornfield. For the first time, we heard the whisper of the katydid and the song of the lark. It seemed rather good to be alive.

Grandpa stood there with hands pocketed in his bib overalls, surveying the sorry state of his cornfield. He looked at it long and hard…then pushing back his hat, Grandfather summed everything up in one word.

3 thoughts on “The Launching….”